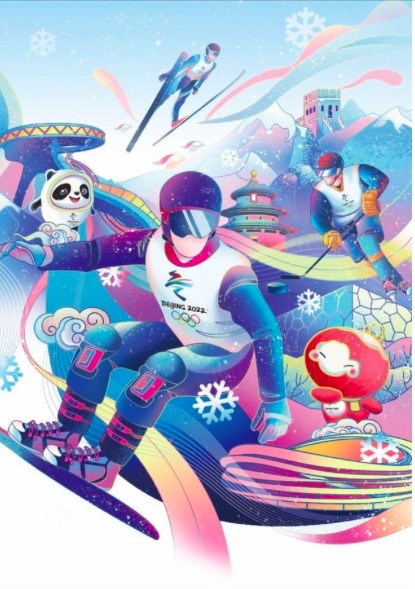 The year 2021 was never meant to be on the olympic calendar, but the Covid-19 pandemic created a one year postponement to the olympics for the first time in the modern era. As such, the Tokyo 2020 Olympics and the 2020 Paralympics were truly unique olympic events. With these sporting spectacles successfully completed, attention now turns to Japan’s neighbour. China had great success at this year’s summer olympics and paralympics, but now a greater challenge awaits, staging the 2022 Winter Olympics in Beijing.

Chinese athletes did exceptionally well at the Tokyo Olympics. China spent much of the games at the top of the medal table, only to be overtaken by the US on the final day of the event. China’s gold medal total was 38 medals, while US won its 39th gold medal in the volleyball finals on the last day.

China sent a delegation of 406 athletes to the Tokyo Olympics, making it the biggest team China has ever sent to an overseas olympics. These athletes maintained their traditional dominance in events such as diving, weightlifting and table tennis, improved their performances in swimming and rowing – and won medals for the first time in track and field events, such as triple jump, javelin and hurdles!

China may have come a close second in the Tokyo Summer Olympics, but the country comfortably conquered the medal table at the Paralympics. China’s 255 athletes competed in 21 sports, winning 207 medals including 96 gold medal. Second place in the paralympic medal table went to Great Britain with 124 medals, 41 of which were gold. The US came third.

China’s success in the paralympics and the fielding of such a large group of athletes unline’s the country’s social support systems for individuals with disabliities. China’s domination of the paralympic games is all the more impressive given the country only entered the competition for the first time in 1984.

Chinese athletes and officials are now firmly focused on a challenge arguably more difficult that winning a gold medal, holding the winter olympics during a global pandemic.

China will also be looking to have some medal success at their ‘home games’. Since 2015, when Beijing was awarded the 2022 Winter Olympics the country has invested heavily in developing winter sports. A sporting budget of $4 billion has been invested to support Chinese athletes become competitive in winter sports and China aims to qualify for all of the 109 winter olympic events.

China’s aims are highly ambitions as the country does not have a strong record in the winter olympics. In 2018, China won just one gold medal at the Pyeongchang Winter Olympics. Furthermore, China has only once broken into the top 10 for the Winter Olympics medal table (Vancouver in 2010.)

Despite a lack of pedigree in winter sports, China’s Ice and Snow Sports Development Program has been investing heavily in winter sports infrastructure, winter tourism, and winter sports education. China now has over 700 ski resorts, an increase of 35% since being awarded the winter olympics. The number of ice skating rinks has tripled over the same period, with over 800 ice skating rinks across the country. There are now more ski resorts and ice rinks in China than there are in the United States.

With China’s winter sports infrastructure firmly in place, and a growing enthusiasm for winter sports by the country’s rising middle classes, China is in a good position to benefit from holding these games at this time. However, the real challenge the country faces now is running an global sporting event, with thousands of athletes from across world, while the covid pandemic continues to claim thousands of lives each day.

China has succeed in containing the covid pandemic better than many countries, and the countries larges cities have all ‘reopened.’ China’s success has been a result of being decisive and issuing strict regulations. This approach will be very difficult to enforce on visiting athletes and officials.

Over 30,000 athletes, support staff, officials and media representitvaed  are expected to travel to Beijing for the 2022 Winter Olympics. China will not be able to demand all visiting athletes be vaccinated, and China’s strict quarantine regulations (two weeks quarantine in a hotel room) will also be very difficult for world class athletes to accept. In the weeks leading up to the games, all the athletes will be following strict fitness programmes, and will need specialist equipment to train.

China is expected to create an olympic bubble, for all athletes and personnel involved in the games, in a similar way that Japan did this summer. The Chinese olympic staff will also be required to remain in the bubble during the olympics, and after the closing ceremony they will all undergo two weeks quarantine before returning to their homes.

Whether there will a way to allow spectators to watch the events live has not yet been decided. No tickets for the games have gone on sale, so it seems increasingly likely that Chinese sports fans will have to make do with enjoying the competitions on television and sports streaming networks.

Olympic games are rarely held without some form of protest. Beijing 2022 faces the possibility of diplomatic boycotts from countries concerned abiut China’s human rights record, in particular the country’s alleged mistreatment of ethnic minorities in Tibet and Xinjiang.

Furthermore, in Canada, there have been concerns that the country’s diplomatic tensions could make it dangerous for Canadian athletes to travel to Beijing. However, the recent release of two Canadian nationals suggests the two countries are looking to move ahead. A winter olympics without Canada would truly be a loss, so hopefully they will now send a full team of athletes.

In the US, Nancy Pelosi called for a diplomatic boycott which involved sending athletes but not an official delegation. The UK Foreign Secretary has suggested he would not attend, but he didn’t support withdrawing athletes.

As the opening ceremony draws closer, it will become clearer which countries are willing to make a stand against China. As long as the athletes attend, China may not be too concerned about foreign officials skipping the events – after all, it would make implementing covid restrictions that little bit easier!