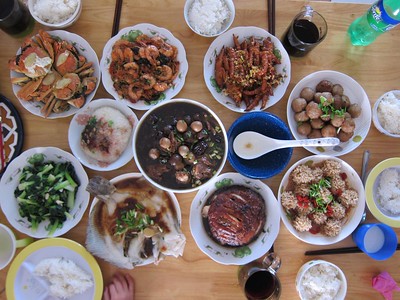 Without a doubt, one of the highlights of any trip to China is the opportunity to sample authentic Chinese cuisine. In fact, there is so much great food to choose from the biggest problem you’ll have (besides overeating and putting on weight) is deciding which of the country’s mouthwatering dishes you should try.

Fortunately for those looking to sample the very best of authentic Chinese cuisine, we’ve compiled a list of the country’s most delicious dishes to ensure you don’t miss out on any of China’s greatest delicacies.

An important thing to remember about Chinese cuisine is that because China is such a huge country, the cuisine varies greatly from region to region. To get the very best food, you should order regional delicacies. If you trying to order flatbread with mutton stew while in Beijing or crayfish with melted cheese in Xian, you’re unlikely to have much luck – it would be the equivalent of trying to order haggis while holidaying in Rome!

Of course every province of China has incredible food, but for the sake of keeping this blog easily digestible (no pun intended) we’re focusing on just four cities – Beijing, Shanghai, Xian, and Chengdu.

Xiao long bao is a steamed bun which is particularly popular in Shanghai. These buns are filled with gelatinized broth made from chicken, pork and cured ham, making it one of the most time-consuming steamed buns to make. If you pass an eatery selling Xiao long bao, be sure to stop for a quick bite, you won’t be disappointed.

Another bun which is a specialty of Shanghai is sheng jian bao. Different from Xiao long bao, Sheng jian bao is pan fried and contains pork and gelatin which melts when the bun is fried. This bun is so popular it has held pride of place on breakfast tables in Shanghai for over a century.

Crayfish are incredibly popular in Shanghai and you’ll find restaurants selling this delicacy all over the city.

The popularity of the freshwater crayfish would make you think that they are native to China but these ten-legged crustaceans are actually natives of North America. During the Second World War Japanese soldiers brought them to China. After the war, these pet crayfish were released into lakes and rivers near Nanjing and in the 1980s they began to appear on menus around eastern China.

Shanghai restaurants are very creative with crayfish , you can order them boiled, barbequed, sweet and sour, served cold, stir-fried with salted egg yolk, beer boiled, spicy and even covered with melted cheese!

Cold Chicken in Chilli, doesn’t sound such an appetizing dish, but don’t let the name deceive you – Liang ban ji is a very popular appetizer.

The dish consists of cold noodles, shredded chicken, and spicy Sichuanese sauce, making it a delicious snack or starter. If you’re visiting Chengdu you need to order this.

Shuang jiao tu is one of the most delicious dishes in Chengdu, and, thankfully for foreigners, it’s also relatively easy to pronounce!

Sichuan cuisine is renowed for being hot and spicy, and the region’s sausages are no exception. La xiang changa contains chili powder, Sichuan pepper powder, and bean sauce – creating a truly unique flavour.

Fen zheng rou translates as “powder steamed meat” which does little to ignite the imagination, and does this delicacy little justice. However, this dish might just be the best Sichuan dish you’ve never tasted.

The ‘secret’ to its rich flavour is they way in which the meat is wrapped with bits of toasted rice and herbs before being streamed.

Sichuan Dumplings, red oil wontons, are simple yet delicious. The wontons come in a thick sauce which is sweet and rich, and they’re served with or without soup. The only problem you’ll have is stopping yourself ordering more!

Peking duck was originally a delicacy of the imperial royal place and has been enjoyed in Beijing for over 700 years. Preparing traditional Beijing roast duck is a rather arduous process but one which made it worthy of the royal palace. Furthermore, it is this process which gives the duck its unique and delicious crispy skin.

First, air is pumped between the skin and meat of a whole duck, a process which helps drain the fat from the duck. Next, the duck is plunged in boiling water to tighten the skin. Then, the duck is air dried and brushed with a sugar glaze. Finally, the duck is roasted and then ready to be enjoyed!

Donkey Burgers sound like a poor gimmick thought up by some underfunded fast food marketing team, but the truth is that this popular meal has been enjoyed in China for over 300 years.

According to local legend, donkey meat became popular during the reign of the Qing dynasty’s Qianlong Emperor. The emperor was traveling through Hebei province when he became hungry. Locals prepard the Emperor a pancake, and having just killed a donkey, decided to stew its meat and put them together. The emperor was so impressed by his meal that he brought the recipe back to Beijing where it has remained popular to this day.

Zha jiang mian, or “noodles with soybean paste”, is a Chinese dish consisting of thick wheat noodles topped with meat and zha jiang (fermented soybean paste). The dish is usually served with various types of vegetables and tastes fresh and delicious.

Dou zhi is probably the most unusual of authentic Chinese cuisine. It has been a popular in Beijing since the Qing dynasty (1644-1911) but it remains an acquired taste.

Dou zhi is gray-green in colour, has a sharp tangy flavor and a egg-like smell that some people describe as ‘off-putting’. It’s not dissimilar to soy milk, but being made from mung beans has a stronger smell and taste. In Beijing it is usually enjoyed in the morning alongside pickled vegetables and Jiao quan (焦圈) – crispy, deep-fried rings of batter.

Fried butter cake, is one of the “Thirteen Amazing Foods of Beijing”. As the name suggests it is a round fried butter cake with an aromatic flavor and it is a very popular local snack which you can find all over Beijing. Be sure to try it!

Cold skin noodles are one of the most popular dishes in north-western China. The noodles are stringy and very different from regular noodles. Usually served with a tangy, spicy sauce they have a delicious and unique taste.

Another popular noodle dish you’ll find everywhere in Xian is “Biangbiang’ noodles. Interestingly, ‘Biang’ is one of the most complicated Chinese characters, consisting of 58 strokes. As a result, you’ll often find the dish listed on menus in simplified Chinese as 彪彪面 or 冰冰面.

Originally, Biangbiang noodles were consumed by manual workers, as they were filling, nutritional and inexpensive, but they can now be found in many upmarket restaurants. The noodles themselves are wide, thick and very long.

The process of making Biangbiang noodles is intense and requires the chef to vigorously slap the dough on the surface top before stretching repeatedly until it’s ready to be cut into long noodles.

Rou jia mo dates back about 2000 years. This authentic Chinese cuisine should rightfully be considered the original sandwich, coming as it does centuries before the Earl of Sandwich famously ordered meat between bread during an all-night gambling session.

In Xian you’ll find La zhi rou jia mo is very popular, and comprises of a simple bread bun, similar to pitta bread, filled with a slow cooked pork belly filling which has been heavily spiced.

Yang rou pao mo is a specialty of Shaanxi cuisine and and is particually popular in the Muslim quater of Xian. It is a hot stew of lamb soup and chopped leavened bread. It is a delicious and rich, usually eaten with sweet/salty pickled garlic.

Restaurants which specialise in this dish are easy to identify, they are usually stacked high with large pita bread loaves.

Another long standing favourite of Xian cuisine, Gourd-shaped Chicken, has been enjoyed in this region since the Tang Dynasty (618 – 907AD).

The chicken is boiled, steamed and then fried to be in a gourd-shape (thus the name). The meat is tender inside and has golden crisp skin on the outside. The dish often comes served with a dip consisting of chilli, fennel, salt and pepper, although you can enjoy it perfectly just as it is!