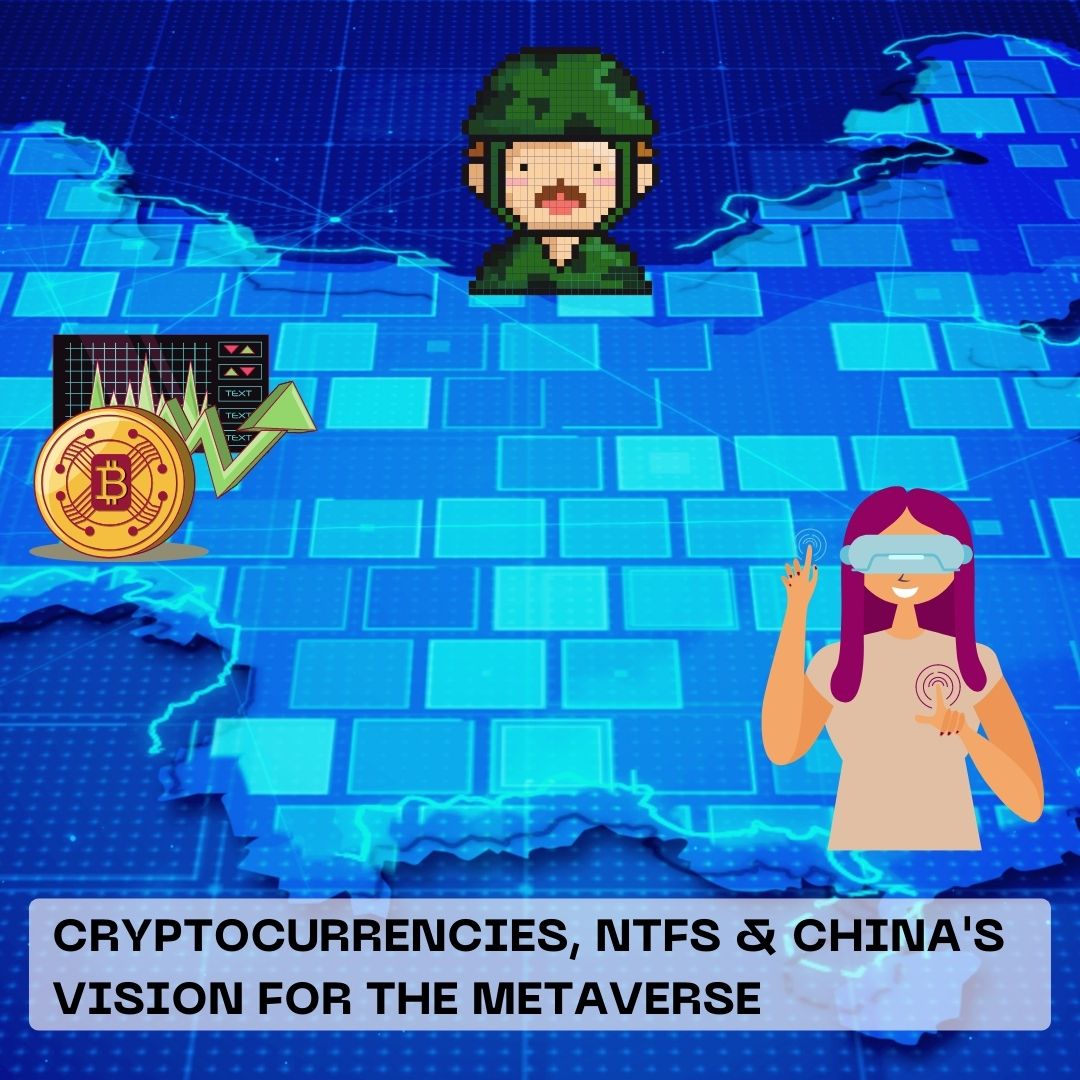 Over the past twelve months, there has been a surge of interest and investment in blockchain, cryptocurrencies, Non-fungible tokens (NFTs) and the metaverse. Cryptocurrency prices have reached new highs, NFTs have been auctioned at Christies and Facebook’s parent company has renamed ‘Meta’. China with its vast technology sector is well positioned to benefit from increased investment in these areas but the country’s vision for cryptocurrencies NFTs and the metaverse is far removed from those of Silicon Valley corporations.

Blockchain and Cryptocurrency in China

As a country, China has taken one of the strongest stances against cryptocurrency trading and mining. It is now illegal to mine or trade bitcoin (or any cryptocurrency) in the country. Payments made in cryptocurrencies are also forbidden. These rulings were reinforced by regulations introduced by Beijing in September, 2021, and led to an exodus of crypto mining businesses from the country.

Digital payments have already become the norm for many living in China’s cities. Beijing is currently trialing a digital yuan currency deployed on blockchain technology. What is fundamentally different about the digital yuan from Bitcoin is that this blockchain is permissioned, enabling China’s People’s Bank to control who can use it. By creating and controlling the digital yuan, China is set to ensure the currency is stable and can not be used for laundering. Furthermore, payments using the digital yuan will be fully traceable by China’s financial institution, giving the country’s leaders incredible amounts of data on consumer spending and the financial habits of the populace.

Countries and financial institutions across the world are keenly following China’s trial with the digital yuan. If it proves to be a success, countries which share China’s concerns with Bitcoin et al. are sure to follow.

The country’s largest tech companies Tencent and Alibaba have platforms for purchasing these ‘unique’ works. Tencent the gaming giant has an app for purchasing NFTs while e-commerce giant Alibaba sold NFT mooncakes during the Mid-Autumn Festival.

What makes NFTs in China unique is that they distanced themselves from cryptocurrencies, such as Ether, which are usually used to value and purchase them.

Rather then use Ethereum, Tencent and Alibaba use their own semi-private blockchain infrastructures, known as ‘alliance chains’, which they have been developing in collaboration with government authorities since 2019. The NFTs available in China are minted on these blockchains which are controlled by a selected group of members, rather than being completely decentralized. China’s NFTs are priced in the national currency (RMB) and bought using cashless payment methods such as Alipay and WeChat Pay.

The approach that Tencent and Alibaba are taking with the NFT market is enabling investment and growth without dependency on cryptocurrencies. Another step these companies have made to distances themselves from Bitcoin and Ethereum is by dropping the term non-fungible tokens and now marketing NFTs as ‘digital collectables’.  The wording ‘token’ was considered too closely linked to the concept of cryptocurrencies, and by rebranding these products as ‘collectables’ the companies selling them wish to remain free from further government regulations.

China’s is also very well positioned to capitalise on the rush of investment in the metaverse. Pursuing developments in virtual reality and augmented reality technologies, the building blocks of the metaverse, is part of China’s most recent five-year plan. China is already a leader in manufacturing these technologies and the country is intent on matching the US as a technological powerhouse.

China and the US are racing to be dominant forces in the metaverse and China with its long-standing and unrivaled dominance of smartphones, notebooks, VR headsets and smart devices is ready to present the US with a serious challenge.

Alongside creating the hardware to realise the ‘metaverse’, Chinese developers are also developing platforms which will enable the metaverse experience. According to the business website Tianyancha, Chinese businesses have registered more than 7,000 trademarks related to the metaverse.

Chinese investors and entrepreneurs are viewing the metaverse as an ‘Oasis’ — a fictional virtual world where people “can do anything, go anywhere” after donning a virtual reality headset: like, “surf a 50-foot monster wave in Hawaii, ski down the Pyramids, or climb Mount Everest with Batman,” as depicted by the protagonist Wade Watts in the 2018 science fiction movie “Ready Player One.”

China’s metaverse looks set to be an environment for escapism, rather like the gaming industry the country’s leading tech companies are already heavily invested in. What this neglects to account for is the metaverse as a platform for dialogue, individual freedoms and freedom of speech.

China is more ready to reap the rewards of cryptocurrencies, NFTs and the metaverse than most countries. However, the country is only willing to do so on its own terms. Silicon Valley’s utopian visions of the metaverse will clash with the harsh realities of authoritarianism in China.