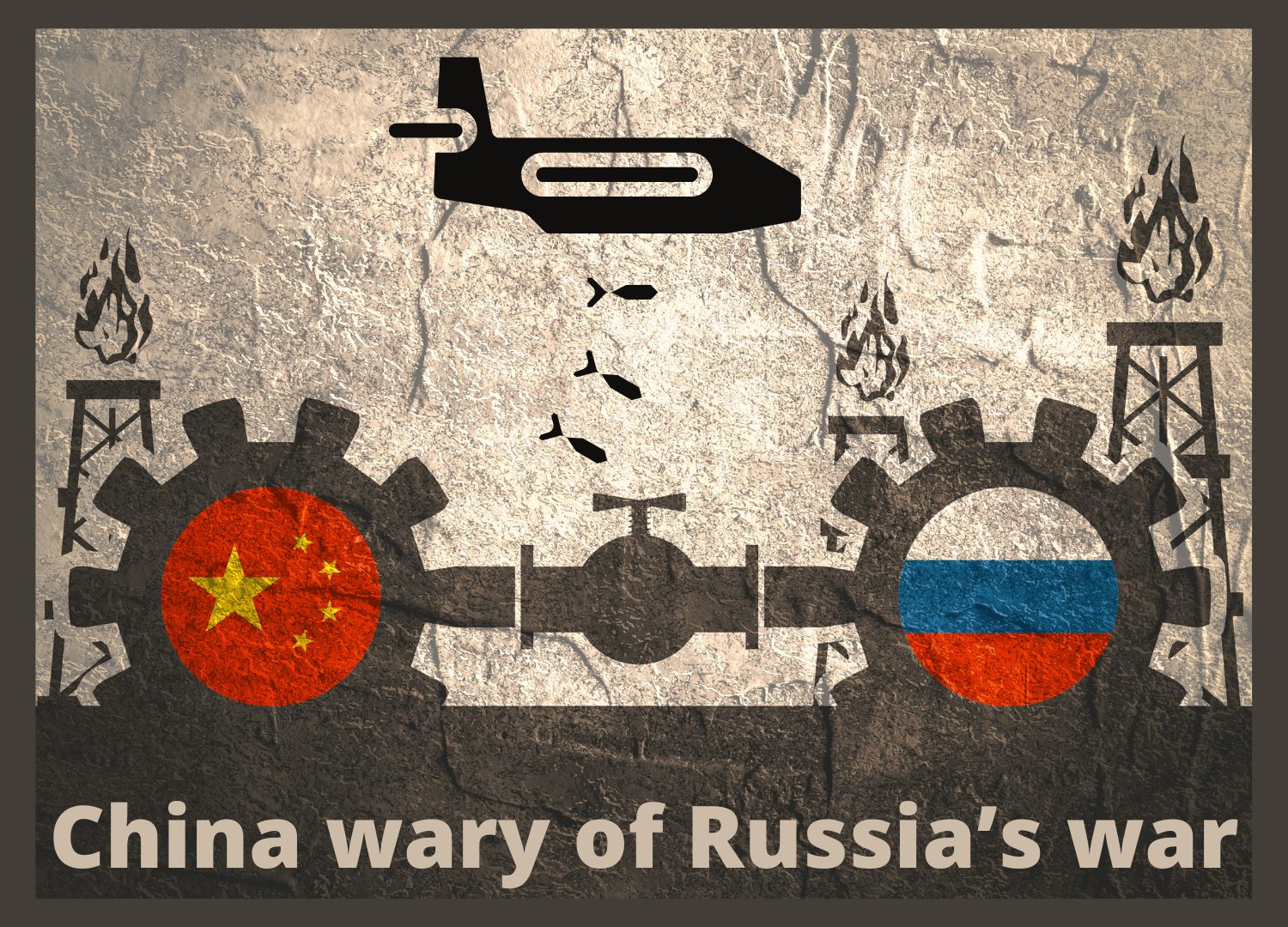 As Putin ordered Russian troops to invade Ukraine, international responses were as predictable as ever. Europe and America condemned the Russian aggression, countries which rely on Russia for trade and military hardware – such as Pakistan and India – refused to criticize Moscow, and Russia’s neighbours Armenia, Kazakhstan and Azerbaijani remained quiet despite the war on their doorsteps. China’s response to Russia’s invasion in Ukraine has avoided criticism of Putin’s leadership but has called for Moscow to negotiate with Kyiv. China has frequently aligned itself with Russia in opposition to the US and Europe but Putin’s war in Ukraine will test that alliance.

In recent years, China-Russian relations have been bolstered by trade and a mutual antipathy towards the US.  Chinese demand for energy has made oil and gas account for over 60% of China’s imports from Russia. That is set to increase following new oil and gas supply deals signed in 2021. In return Russia relies heavily on China for machinery, electronics, chemical products, foodstuffs and agricultural products.

The conflict in Ukraine will impact Chinese-Russian trade and diplomatic relations between these allies will be strained.

Russia’s invasion of Ukraine is set to put the Chinese leadership in an awkward position. China refused to call Russia’s actions an invasion but has called ‘all parties’ to show restraint. Furthermore China has good relations with Ukraine. In January this year, China and Ukraine celebrated the 30 year anniversary of China-Ukraine diplomatic ties. China favours Ukraine being a neutral state and a bridge of communication between the east and west.

In the build up to the war, Moscow and Beijing issued a statement detailing their opposition to further NATO expansion. This issue is one which President Putin has frequently remonstrated as he fears Ukraine will eventually join NATO. In the days before the war, Putin demanded NATO guarantee not to expand eastwards, something which the member states refused to do.

Despite China offering that important show of alliance, the Chinese leadership stepped back from supporting Russia at the UN Security Council vote on 25th February. Eleven council members voted to deplore Moscow’s invasion of Ukraine, with China, India and the United Arab Emirates abstaining. Unsurprisingly Russia used it’s permanent place on the security council to veto the vote.

It’s beneficial for Russia to remain on good terms with China as Putin has few allies in the international community, and the two countries share many common aspirations and obstacles.

It’s also no coincidence that the invasion of Ukraine started shortly after the Olympics in Beijing had been all wrapped up. International sporting events such as the World Cup and the Olympics are important to Russian and Chinese leadership. China would have been most displeased if war in Ukraine had overshadowed the Beijing Olympics.

Over the past decade, Beijing has put significant effort into promoting China as a leader on the international stage. China’s ambitious ‘Belt and Road Initiative’ has increased the country’s influence across Asia while the ‘21st Century Maritime Silk Road’ extends China’s reach into Africa, where the country wields significant influence. At the security council all the African representatives voted against Russia. Supporting Russia in Putin’s war on Ukraine would undermine China’s diplomatic standing in Africa.

The first cracks in China-Russian relations

China abstaining from the security council vote was the first obvious sign of Beijing’s wavering support for Moscow. This has now been followed by Chinese banks move to limit transactions and financing for Russian purchases. A move analysts believe is being made to protect China from economic sanctions being imposed by the EU and the US.

This weekend, Chinese statements indicate an increasing discomfort with Russia’s invasion of Ukraine and the conflict in large urban areas.

“China has been following the evolution of the Ukraine issue, and the present situation is something China does not want to see,”

“it is absolutely imperative that all parties exercise necessary restraint in order to prevent the situation in Ukraine from deteriorating or even getting out of control. The safety of ordinary people’s lives and properties should be effectively safeguarded, and in particular, large-scale humanitarian crises have to be prevented.”

Much of the reasoning for Russia’s invasion is based on Putin’s reading of history and his desire to reclaim Ukraine. Ukraine has a long history and had been an independent nation before 1922 when it acted as a founding nation of the Soviet Union. Ukraine then claimed independence in 1991 during the collapse of the Soviet Union. An essay detailing Putin’s account of Ukraine and Russian history was published in 2021 and is now compulsory reading for all Russian military personnel.  Putin’s account of history argues that Ukraine is a region of Russia and one which should never have been gained independence.

China’s leadership views Taiwan in a similar manner to which Moscow views Ukraine. It was towards the end of the Chinese Communist Revolution that the ROC Government fled mainland China and relocated to Taiwan. China claims the islands as Chinese territory, calling the region Chinese Taipei while Taiwan’s leaders and populace claim the islands to be an independent nation.

China may not support Russia’s invasion of Ukraine, but the leadership in Beijing will closely follow the international community’s reaction. If Russia were to seize control of its ‘lost territory’ with relative ease, and with limited intervention from Europe and the US, Beijing may feel more encouraged to take similar steps. Equally, if Western allies provide significant military support to Ukraine, as Germany and the US are promising to do, China will be deterred from moving to seize Taiwan until the geopolitical climate changes significantly.