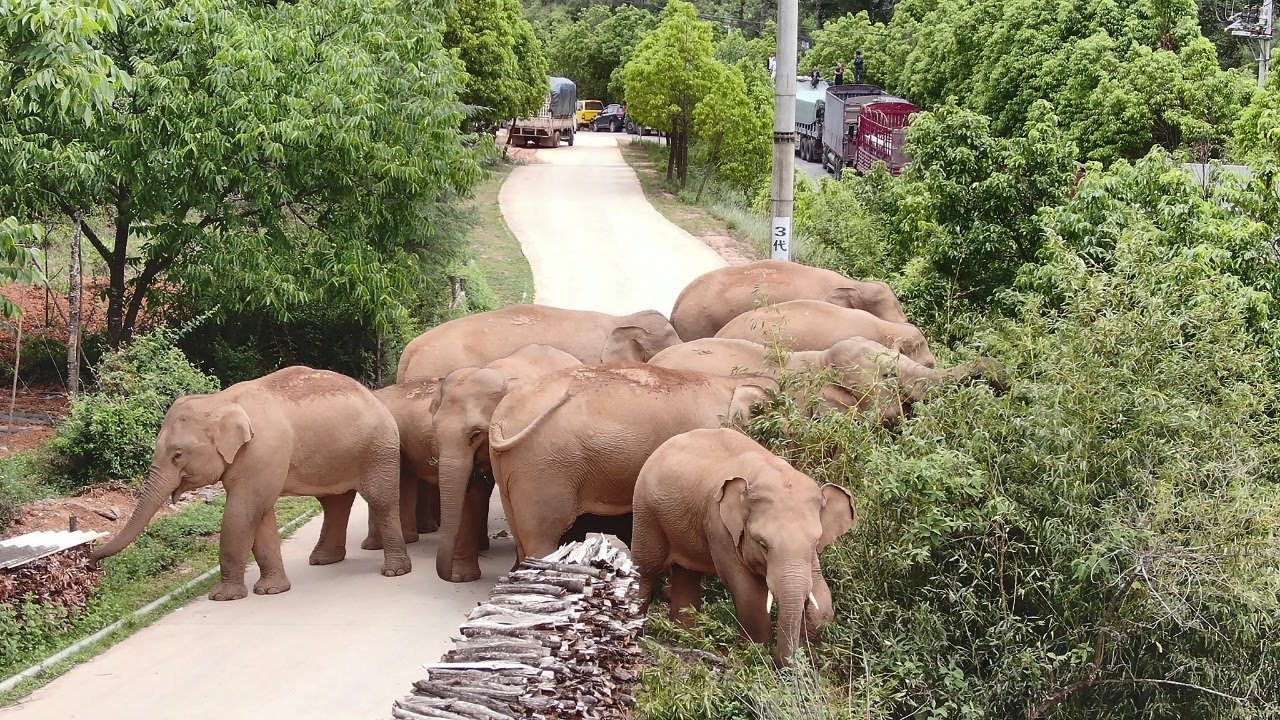 A herd of fifteen wild elephants have captured the hearts of millions across China as they make a long and mysterious migration across the country’s southern provinces. The elephants’ journey began in April this year, after the herd left their nature reserve in Xishuangbanna, Yunnan Province, Southern China. Since leaving the nature reserve, the elephants have trekked over 500 kilometers.

Following the wild elephants on their adventure are emergency service workers, wildlife rangers, police officers and veterinarians who have been monitoring the herd’s progress and doing their best to protect them and the villages they pass through. In recent weeks, the herd have been joined by members of the media who now provide 24-hour updates on their adventure. The herd have unexpectedly become China’s latest social-media stars, with millions of people tuning in each day to catch up on their exploits.

It’s easy to see why the herd’s elephants, six female adults, three male adults, three juveniles and three babies, have transfixed millions of viewers. Their mysterious journey and their exploits have been broadcast on national television, internet live streams, as well as all social media networks.

Viewers have been able to see the herd sleeping in forests, bathing in rivers, running along empty streets, breaking into businesses, crashing through villages, destroying crops, knocking down doors, eating villagers’ food and drinking their water. To date, the herd has caused over 400 incidents of damage, costing more than $1 million.

Some of the elephants have also been caught on camera stealing locally produced alcohol. On one occasion, a young elephant drank so much alcohol that veterinarians  had to spend the following day helping rehydrate the young pachyderm. According to a zoologist from the Chinese Academy of Science, the elephants are not attracted to alcohol per se, but rather by the fruits and sugars which locally produced alcohol is made from.

“When they smell alcohol, they’re actually after the fruit it’s made of”

Zhang Jinshuo,a zoologist at the Chinese Academy of Science

China has made great efforts to expand the country’s green areas, and the Great Green Wall is a testament to those efforts. However, natural rainforests with diverse and complex ecosystems still need greater protection, as they are often encroached upon by rubber plantations.

Elephants have been a protected species in China since the 1980s. Herds of wild elephants are found in one region of China, the southern province of Yunnan and along the boards with Laos and Myanmar.

The wild elephant population in China dropped to just 180 in the 1980s. Efforts to protect these animals with the creation of a nature reserved in  Xishuangbanna have protected these herds and enabled the elephant population to increase to over 300.

One reason for leaving their reservation is that the Yunnan’s wild elephant population is now out growing their protected areas. A shortage of food and space within the reserve may have driven this young herd to leave for new pastures. In recent years, there has been an increase in elephant attacks in China’s southern provinces, with over 20 people killed by elephants in the past two years.

A Mysterious Migration | Where next?

Since the elephants marched out of the Mengyangzi Nature Reserve in Xishuangbanna, they have travelled steadily north. The fifteen wild elephants are now close to Kunming, a city with a population of  8.5 million.

The wildlife experts, emergency service workers and veterinarians following the elephants, are working to steer the elephants away from Kunming. The herd have already caused over $1 million of damage through rural areas, and that tally would soar drastically if the mysterious migrants entered the city.

While some scientists have hypothesized that the elephants migrated because their habitat has shrunk, there is another, simpler explanation – they are lost.

Chen Mingyong, a professor at Yunnan University’s Asian Elephant Research Center, told Xinhua it is uncharacteristic for a herd of wild elephants to continue traveling in one direction. He suggests the herd leader is inexperienced and lost.

Staying up-to-date with this fascinating migration, couldn’t be easier. There are YouTube channels, Twitter accounts, blogs and podcasts, all covering the herds adventures – be sure to stay tuned for the next chapter in this fascinating story!